Gorr’Rylaehotep is the secondary antagonist of Dark Harvest.

It is the series’ incarnation of Slender Man; a mysterious interdimensional entity with supernatural powers that is worshipped by The Order, who believe it to be a resident of the "Fourth World" that traveled into the "Third World" through an interdimensional rift.

Gorr’Rylaehotep is an eerie figure that takes on the form of an unnaturally tall, faceless man wearing a black business suit and tie. It is also able to form black tentacle-like appendages from its back, which are said to be cracks in space and time, however this ability has never been shown in the series.

Gorr’Rylaehotep's motives appear incomprehensible. It has been known to appear at seemingly random times, sometimes stalking its targets from a distance or actively harming them in a variety of ways, one example including the disembowelment of its victims.

In the early 1900s, Heinrich Kaufmann II, an archaeologist who believed that ancient civilizations were capable of feats including time travel and teleportation, traveled to Egypt in search of a tablet said to detail the ancients' secrets. When he discovered the tablet, he was warned by the locals that a god known as Gorr'Rylaehotep had supposedly entered this world and placed a curse on it. The tablet and the transcript of its translation later fell into the hands of The Order's First Overseer before being stolen from him by the Nazis.

After the end of World War II, a former Nazi scientist named Hans Freuhauf attempted to recreate the ancient rite of Gorr'Rylaehotep using the information contained on Kaufmann's tablet. This was attempted in secret using funds from the United States government in what was known as the Princeton Experiment. The experiment ultimately proved somewhat successful in 1957, as a Rift to the 4th World was eventually opened. However, Gorr’Rylaehotep then appeared and slaughtered all who were present except for Marc McComber, who developed special abilities as a result of his exposure to the phenomenon. It is believed by some that Freuhauf was connected to a Gorr'Rylaehotep-related cult, although the Collective Knowledge implies that he was not associated with The Order, but merely a fellow believer.

In the summer of 1958, 72 children mysteriously vanished from the Rainwood Day Camp & Learning Center. Many blamed the disappearances on "The Tall Man", a serial killer who had committed a double-homicide within two miles of the day camp at around the same time. The day camp had been founded by Lawrence Rainwood, who was also the Chief Overseer of The Order, and the mysterious event would come to be known as the Rainwood Incident. Several weeks after this incident, the building mysteriously caught on fire, destroying most of the documents within it.

After becoming The Order's Oracle, Marc McComber prophecized that the Gorr’Rylaehotep would one day kill the two Harbingers, Chris and Alex, which prevents The Order from doing so themselves. An Overseer in The Order stated that the reason why the Gorr’Rylaehotep has yet to kill the two individuals is unknown to them. Despite the Oracle's prophecy, the heretical sixth enclave within the New Jersey Chapter of The Order is still willing to kill the two Harbingers themselves and has attempted to do so on several occasions.

Gorr’Rylaehotep has made 11 appearances in the series.

Gorr’Rylaehotep has killed the following characters. 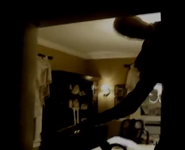 Add a photo to this gallery

Retrieved from "https://darkharvest.fandom.com/wiki/Gorr%27Rylaehotep?oldid=6764"
Community content is available under CC-BY-SA unless otherwise noted.